Lemme ShadowBox With You 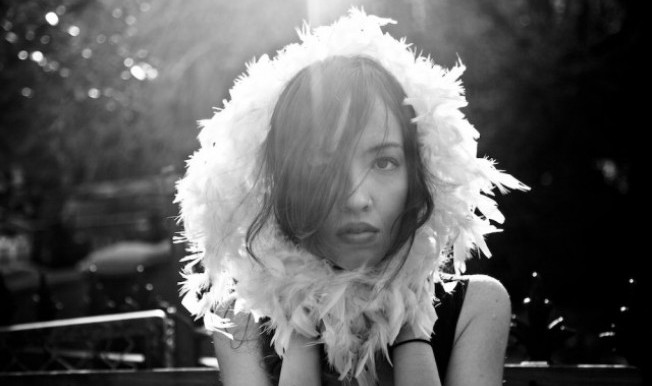 Often times I shadowbox with myself in order to find a weakness in evil NegaReuel’s defenses,

whose claim is that Taste™ and Cred© are totes necessary to establish a lucrative/buzzworthy social media empire and/or strong personal brand (via Roddy’s State of the ‘Indie Cred’ address).

In the pursuit of consistently delivering Sweetest Drip knockouts, I train at many indie music blog/label/tastemaker gyms to prepare against techniques like the P4K Panning Punch.

Continuing my studies with Pictures Music, I came across a worthy sparring partner in Bonnie Baxter (AKA Shad[]wB[]x) from Brooklyn, NY.

ShadowBox is powerful, poised… her live act shows a wild and uncontrollable force who at times lets the listener into a delicate and reflective world just for a moment. It’s just ShadowBox and her machinery joined occasionally on guitar by Icky Doom[e].

Hanging out on her Tumblr/Facebook, I found that ShadowBox has a lil thing for the relationship between humans, machinery, and the cosmos — quite fitting for her setup. A talented indie artist, Bonnie pairs vocals straight from the soul with gradually layered bass beats, skittering snares, and hazy synths that give you goosebumps.

We’ve seen this style of music composition as performed by Clare Boucher (AKA Grimes), who balances totally qt bbgrl in-place-dancing and reverb-crooning with a trusty Roland Juno-G synthesizer keyboard.

Though Clare and Bonnie have their own influences and aesthetics (ShadowBox’s raw/visceral touch vs. Grimes’ playful post-everything pluck at our heartstrings), it’s just a blessing to see artists drawing the line between talented self-expression vs. hype-machinery.

Rather than gambling time/money$ on shallow sirens that’d love to crash your boat/vibe/high, why not keep it afloat on an ocean brimming with soulful DIY beats? We’re keepin’ our ears open for you, Bonnie!

Be sure to peep the previously-released Lady Doome EP, available SoundCloud for free-fitty! While vibing hard with songs like Screenz, I shadowbox with myself everyday trying to figure out how to get my own #rare #inspirational and #legendary indie self-expressions out there for some hardcore critical hits.

Jon’s Crate: The Top 5 Joy Orbison Tracks Out There

There is no Future Garage

NASA Has A SoundCloud (Yes, Really!)